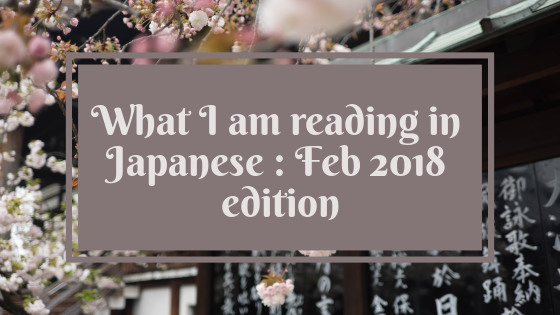 It’s been a few months since I last did one of these posts (the last one I wrote was back in October). I’m trying to increase the number of books and manga I read in Japanese this year, and so far I’ve managed to stick to my target of reading at least 10 pages of a novel or manga every day (hopefully I can keep it going!). Here’s a couple of books that I’ve started or finished recently:

Note: this book is available in English and has the title “Calling You”

This light novel is a collection of 3 short stories (it is also available in manga format). I’m about halfway through it at the moment so will only mention the first two stories.

The first story is the story from the book’s title. Ryo is a high school girl that finds it difficult to connect with people. She imagines that she has an imaginary mobile phone and is shocked when her phone rings and she is able to have a conversation with another person in the real world. Through the imaginary phone, she gets to know two people: a boy called Shinya and a university student called Yumi. Shinya, in particular, becomes a good friend to Ryo, encouraging her to come out of her shell. However, tragedy strikes when they finally decide to meet. The second story is called 「傷」and is about a boy who discovers that his classmate Asato has the ability to transfer wounds and scars from one person to another.

There is a film adaptation of the first two stories: I have watched the adaptation of きみにしか聞こえない and enjoyed it, so reading the story gave further nuance to the plot and characters.

This is probably the easiest story to read on the list but is still probably around JLPT N3 level. I find Otsuichi’s writing style quite easy to read and the vocabulary used hasn’t been too tricky so far despite the supernatural elements.

This is a novel by famous author Banana Yoshimoto, although not translated into English as far as I am aware. Two sisters called Donko and Guriko live together and run an online advice page called ‘The Acorn Sisters’, the same as the title of this book. The website is called that because when you put the names together their names spell out the Japanese for acorn.

The book is written from younger sister Guriko’s perspective. The sisters had an unsettled childhood; having lost both parents in an accident, they spent several years moving between different caregivers. A large part of the book focuses on how this has influenced both sisters into adulthood and how it affects their approach to advice giving.

I bought this book on a bit of a whim, but I soon found myself getting into the story. Yoshimoto does a great job of fleshing out the sisters’ personalities and their motivations. Having sisters myself, it made me think about my relationships with them and how they have developed as we have all gotten older.

Banana Yoshimoto’s works tend to be easy to read, but in terms of vocabulary used I would probably recommend this for JLPT N2 level learners.

Note: This manga has also been translated into English and is known as “The Gods Lie”

This is a manga that I read about on someone else’s blog a few months ago – unfortunately, I can’t remember who wrote about it otherwise I would link to them here.

Natsuru Nanao is a young student who is passionate about football. One day, he happens to run into his classmate Rio Suzumura and finds out that she has been looking after her younger brother without a parent or guardian for some time. She begs him to keep this a secret as she is afraid of being separated from her brother. Natsuru does so but also does his best to spend time with the Suzumura siblings, helping out whenever he can. As his feelings grow for Rio, Natsuru’s emotions towards the whole situation become more complex.

I won’t spoil any other plot details, as it is better to read it without knowing too much. It is a very sad story but does end on a hopeful note. I have to say that I love the art style of this manga too – there is something about the way that the characters are portrayed that seems very realistic.

In terms of language level, I’d say that this is an appropriate read for JLPT N3 level learners. The main characters are young so there is slang, but aside from that, intermediate learners should be able to read it. I found that once I started I managed to read the majority of it in one sitting because I got engrossed in the story (it is a single volume manga but has 5 chapters).

You can read a sample of the manga here (click on the green “立ち読み” box under the picture of the book cover).

So that’s it for today’s post! What are you reading at the moment (in Japanese or otherwise)? Do you have any recommendations for me? Let me know in the comments!